1 by LouDimaggio
Hello everyone, thanks for allowing me to join. I stumbled across this on another rewatch and really wanted to run this by you all. I looked around but don't think this has been discussed yet.

Season 4 episode 9, Whoever Did This. Tony is with Junior in the hospital. Tony states to him: "You were very confused...you flunked your holstein or something" Junior: "I'm 71 years old for Christ sake, YOU get hit in the head, see how good you do."

Tony is possibly referring to the Rorschach test but instead calls it holstein. Now we all know that nothing is said by accident in the Sopranos. And the fact that they are discussing hits to the head only further make clear in my opinion that this is referring to the final scene at Holsteins. I think it's very significant because it shows that Chase knew how he wanted to end the series all the way back in season 4. There is also an underlying theme in the series that Tony will be tested and has to pass that test. The final scene and the "hit" to his head would be that test. This is ultimately another piece of evidence that things did not bode well for Tony inside that diner. Also, one final note. The Rorschach test Tony was most likely referring to was on full display in that diner. One of the ink blots resembles a cat , which was directly behind Tony. And, similar to the Rorschach, you could see the events that took place inside those walls innocently or violently. However, I think this scene in season 4 definitively points to the latter.

Let me know your thoughts, and if anyone has noticed this. Here is a clip of that scene that I uploaded: https://www.youtube.com/watch?v=DRIj21vc-pM

That's a really astute observation and interesting theory! I'm with you on Chase knowing how he would end the series when he was writing season 4. Recall from the carefrontation episode of that season Tony's remark when he learned Chris had smothered Cosette. "I oughta suffocate you, you prick!" or similar. The murder of Chris was the penultimate story point in the entire series (you could even argue ultimate), and it was foreshadowed by that remark and by the larger story arc of him deliberately "binding Chris to himself" ostensibly to lower the risk of his own legal exposure in giving orders to others.

There's another cognitive or psychological test that is somewhere on the tip of my tongue that I can't bring forward that I seem to recall had a closer resemblance to Tony's malapropism on the failed test. Rorschach is so phonetically different that I'm thinking the malaprop would have been too obscure to be funny. But turning something a bit closer into "Holstein" (which is, to my understanding, a type of cow) is typical Sopranos humor.

Still, though "Holstein" is not an exact match to "Holsten," it's close enough that your theory demands some serious consideration, especially in the context of a "hit to the head." And the conception of that entire event as an either/or, Shcrodinger's cat Rorschach that only becomes reality by the consciousness of the observer "collapsing the wave" and imbuing the scene with their own "truth" or interpretation is a brilliant way of looking at it.

Thanks for sharing this.:-)
Tony, his spirits crushed after b-lining to the fridge first thing in the morning: "Who ate the last piece of cake?"
LouDimaggio
LouDimaggio
Civilian

3 by LouDimaggio
Thanks! Yes I looked it up and their is a "Folstein Test" which Tony of course butchered and clearly uses an H at the beginning. Tony would most likely be aware of Holstein's Diner at that time and perhaps it came out as a Freudian slip. I believe Chase on the other hand inserted that word very purposefully.
LouDimaggio
LouDimaggio
Civilian

4 by LouDimaggio
A few more notes about this scene, I noticed the clock behind Tony during this scene appears to be 3 o'clock. It's a tough angle but you can somewhat make out where 4 o'clock would be and it is not there, but the number before it. Also, Tony calls Junior's lawyer during this scene whom is headed to an Irish Pub for dinner (Irish guys were referenced in Christopher's 3pm message). 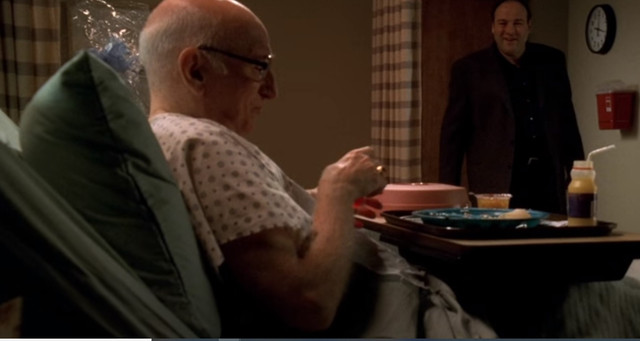 5 by LouDimaggio
Also, orange juice sitting on Junior's table in case you missed it :)

6 by FlyOnMelfisWall
Ha!:-)
Tony, his spirits crushed after b-lining to the fridge first thing in the morning: "Who ate the last piece of cake?"
6 posts
Post Reply

Return to “Sopranos Symbolism and Subtext”